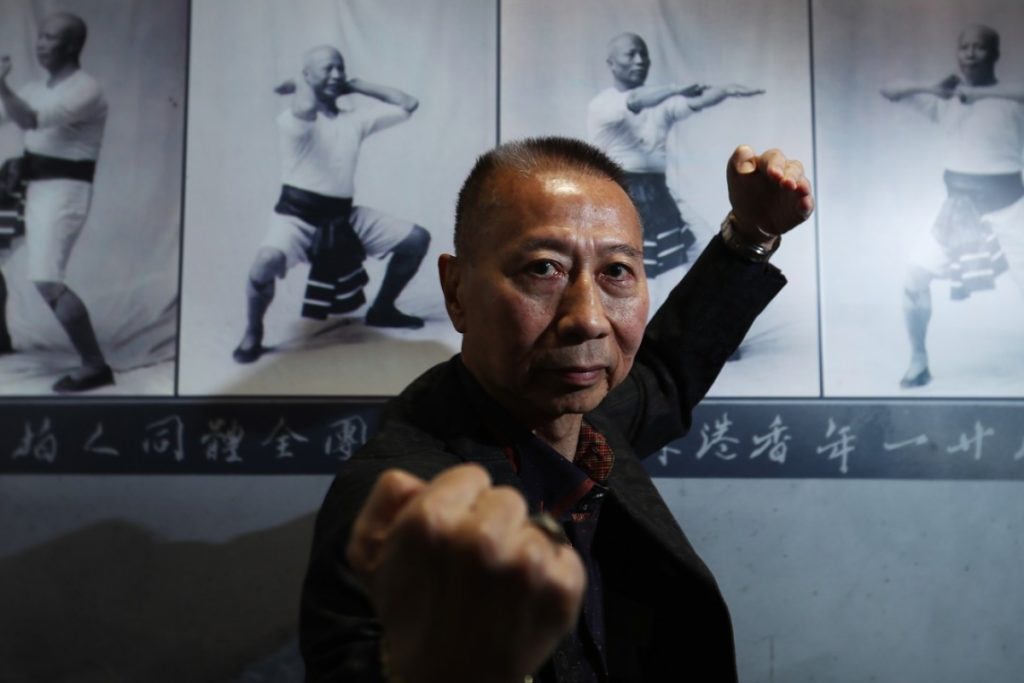 From every corner of the globe, martial artists and luminaries gathered on 24 November 2019 in Hong Kong, to honor Grandmaster Lam Chun Fai, and to celebrate his 80th birthday. 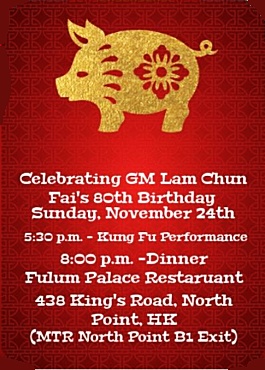 As part of the celebration, the 3rd Hung Kuen Competition was held on 23 November 2019, in Wanchai. 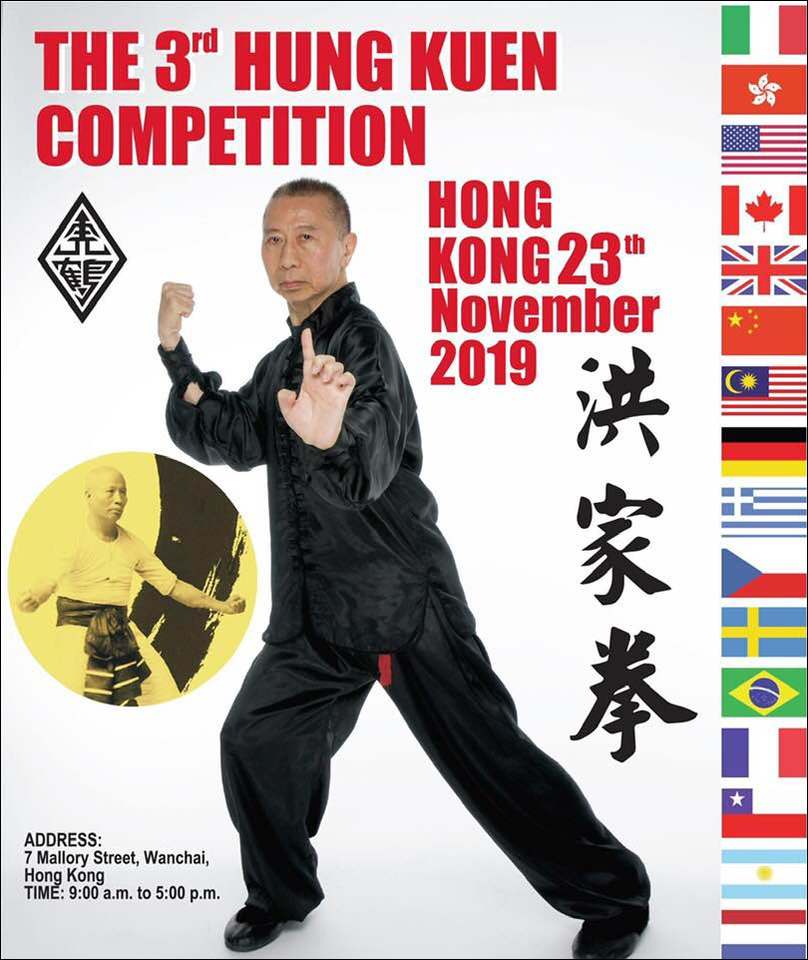 BEGINNING WITH TANG KWOK WAH
Whenever thinking of Great Grandmaster Lam Cho’s outstanding students, the name of Grandmaster Tang Kwok Wah (1924-2011) is always prominent among them. 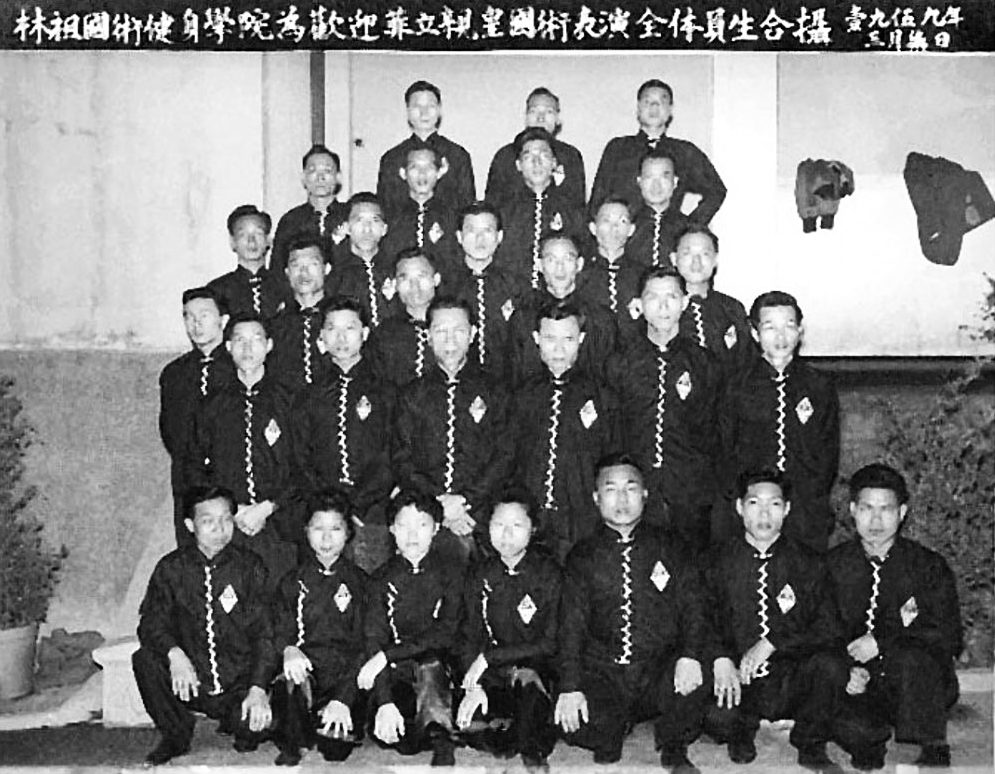 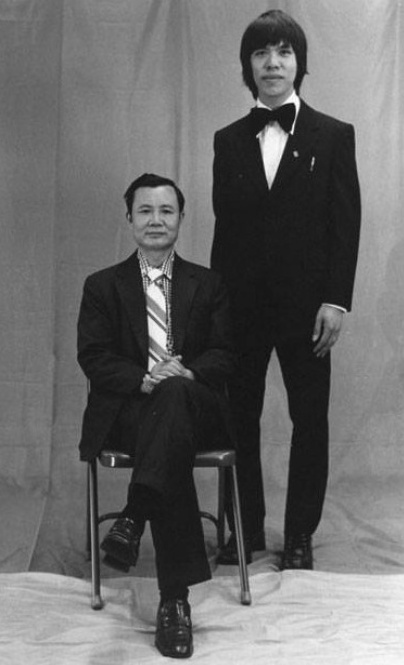 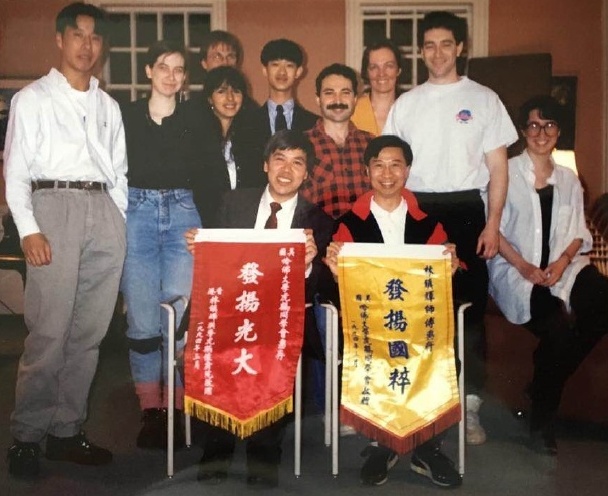 CHECKLEY SIN
Earlier in the year I had been both honored and delighted to be invited by Grandmaster Yon Lee to visit his Harvard Tai Chi Tiger Crane Kung Fu Club at Harvard University in Cambridge, Massachusetts, and to have a chance to experience and better understand the legacy left to Lam Family Hung Kuen by the late Grandmaster Tang Kwok Wah. I was asked, on behalf of Harvard Harvard University, to facilitate an introduction with the World Hung Kuen Association’s President, Grandmaster Checkley Sin Kwok Lam.

Within hours, Boston lobsters were being flown to Checkley Sin’s household in New Territories, courtesy of the Hon. Raymond L. Flynn, former Mayor of Boston, Massachusetts  and former US Ambassador to the Vatican. 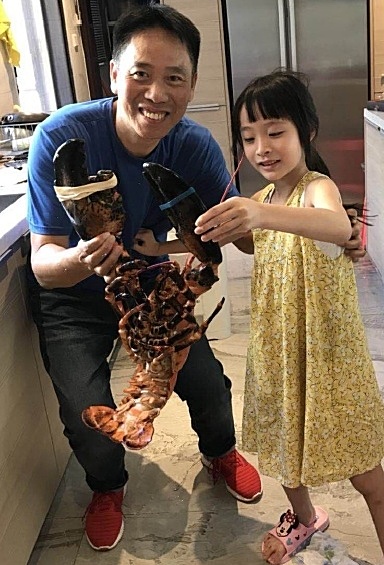 CHECKLEY SIN IN BOSTON
Upon arrival in Boston, Checkley Sin was first ushered into Boston City Council chambers, where the occasion of his visit was honored with a commemorative proclamation, presented by Councilor Ed Flynn, on behalf of the City of Boston. 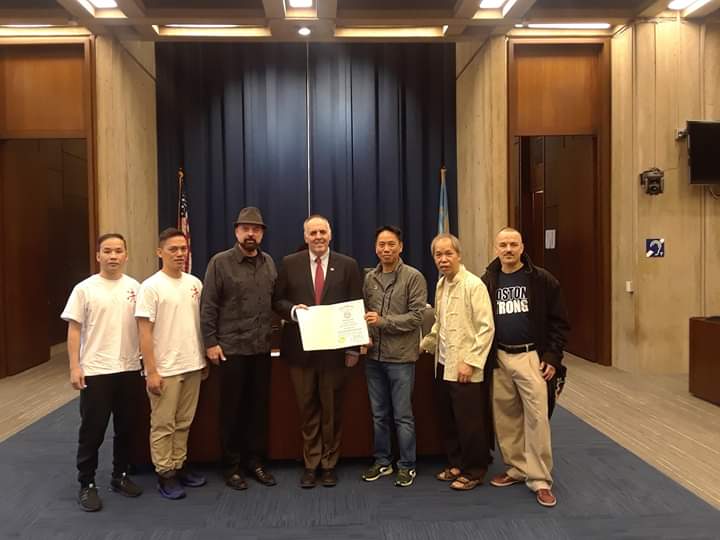 Next was a meeting with the City of Boston Office of Business Development, where Checkley Sin, one of China’s most successful Kungfu film producers, was presented with local film industry options and incentives. Options available in China were also explored. Some 20 years earlier, a “sister state” trade status between Massachusetts and Guangdong had been authored by Grandmaster Yon Lee, providing foundation, and further paving the way for this discussion.

Lunch at posh Durgin Park, a restaurant located in Boston’s historic Quincy Market district, was followed by a meeting with Checkley Sin,  Dr. Sean Palfrey of Adams House, and representatives from Harvard’s Office of Development,  where scholarships, endowments, and program funding were the subject of discussion.

The result so far has been Grandmaster Checkley Sin’s preliminary offer of fully funded internships for ten Harvard students each summer, beginning in 2019. 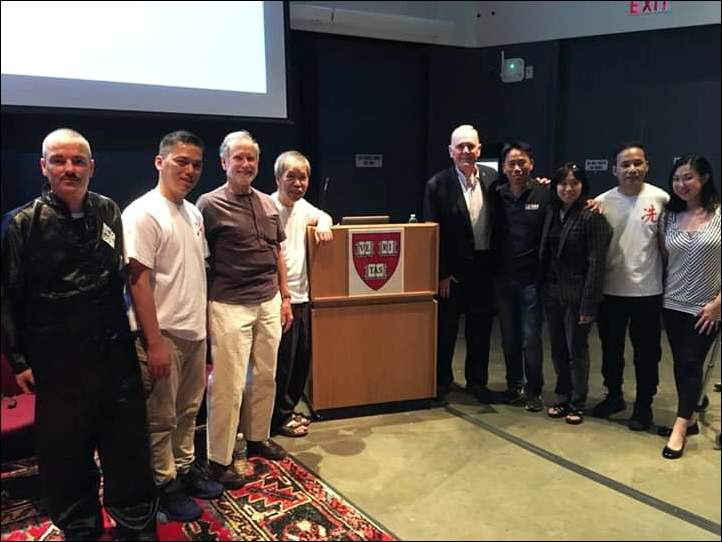 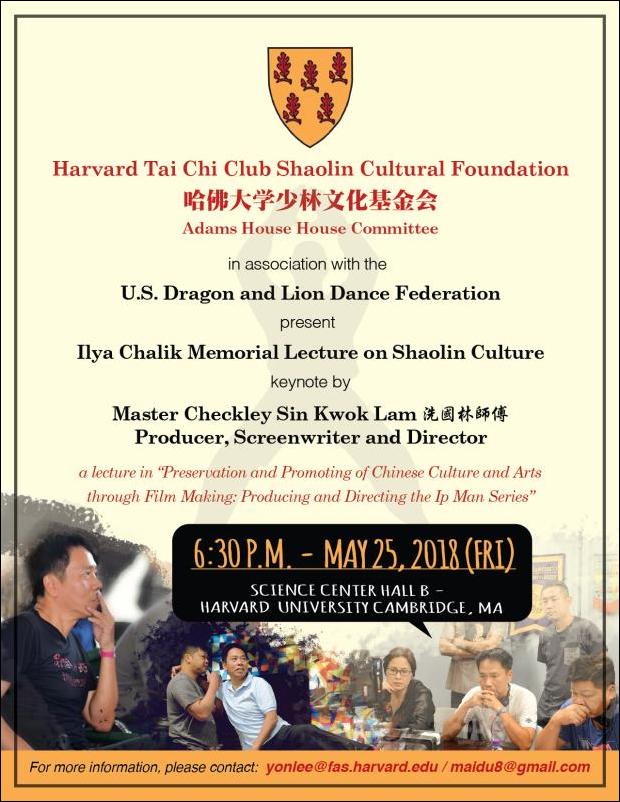 On 25 May 2018, Grandmaster Checkley Sin was keynote speaker for the Ilya Chalik Memorial Lecture on Shaolin Culture, organized by Harvard Tai Chi Club Shaolin Cultural Foundation, in association with the U.S. Dragon and Lion Dance Federation, and held at the Science Center at Harvard. His subject was “Preservation and Promotion of Chinese Culture and Arts through Film Making: Producing and Directing the Ip Man Series,” complete with live demonstrations of martial arts, ably assisted by Ip Man action directors Sifu KK Yiu and Sifu Marvel Chow. The show concluded with my own performance of Plum Blossom Double Chain Whips, in honor of Chinese culture and martial arts preservation, Lam Family Hung Kuen, and the late Great Grandmaster, Tang Kwok Wah. 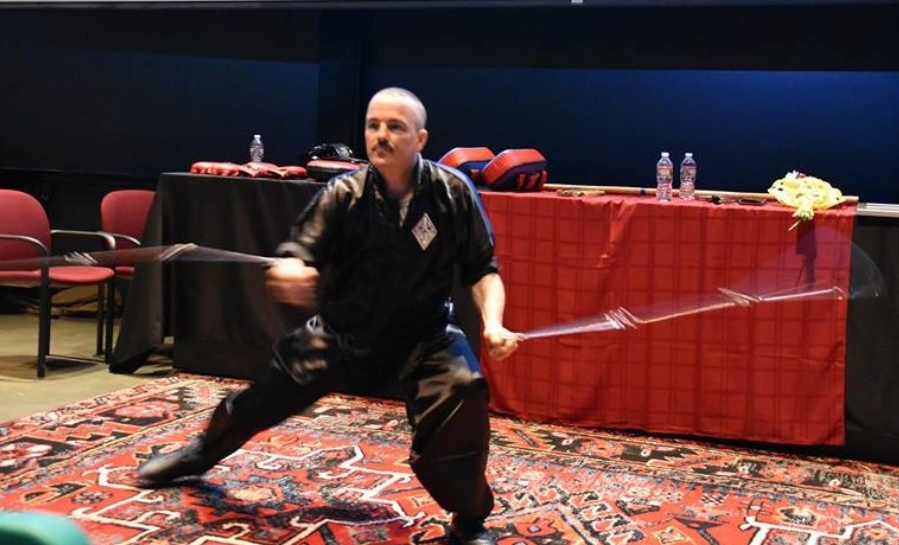 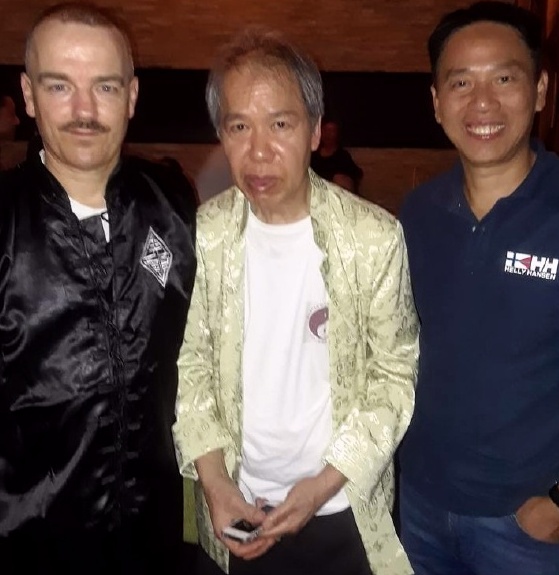 Grandmaster Yon Lee and these students shared with me an understanding of Tang Kwok Wah Hung Kuen, Qigong, and the “Five Elements Tai Chi,” a collaborative development between Grandmaster Yon Lee and Grandmaster Winchell Woo. This is not to be confused with the better known Taijiquan, “Five Elements Tai Chi”, a formula also based in Hung Kuen principles, also polarized in five phases, but focusing on the soft bridge, and unique to Grandmaster Tang Kwok Wah’s research in his later years.

As Grandmaster Winchell Woo was on business in Hawaii, I was unfortunately unable to meet with him during this visit. Grandmaster Yon Lee remembers fondly the Harvard visit of Great Grandmaster Lam Chun Fai in 1994, and hopes to invite him again, as well as other Hung Kuen masters interested in cultural preservation and exchange, for the first Harvard University Hung Kuen Summit, to be scheduled for Autumn 2019.

On 25-27 May 2018, the First National Lion and Dragon Dance Federation Championships were held in both Quincy and Boston, Massachusetts. Hosted by Sifu Nelson Ferreira, Sifu Mai Du, and Sifu Phong Vo, Grandmaster Checkley Sin was a guest of honor. Lion dance teams from all over the USA were present for this gala event. I was likewise pleased to meet Lam Family Hung Kuen brothers, Sifu Lucien Zoll and Sifu Alex Woo, both of Boston’s Grandmaster Kwong Tit Fu linage, through Grandmaster Calvin Chin. 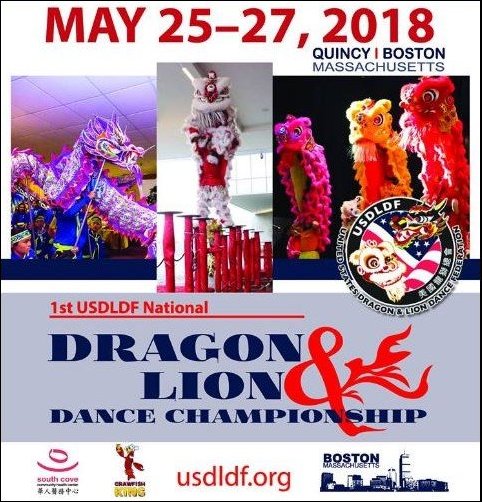